The nasal mucosa and its cilia (tiny hairlike structures) also act as a physical barrier to particles and germs. Therefore, nasal breathing lowers the risk of allergies and infections as compared to mouth breathing. 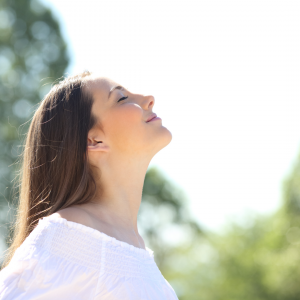 The turbinates of the nose are structures which help heat and humidify the air we take in, making it comfortable and less drying to breathe. Breathing through the mouth increases the risk of sleep apnea, dry mouth, and a more acidic saliva, contributing further to risk factors for heart disease and tooth decay.

Furthermore, as we breathe nasally our paranasal sinuses produce nitric oxide, an important gas which helps regulate blood vessel dilation in the body. The nitric oxide is inhaled into our lungs, where it’s absorbed into the bloodstream, helping to regulate circulation and improve
oxygenation and blood vessel function. Nitric oxide production by the sinuses requires adequate airflow, and can’t occur if airflow is blocked by congestion.

One enlightening book on the topic of breathing is Breath, by James Nestor. Nestor describes participating in tests designed to track various biomarkers over 2 weeks when he was restricted to breathing only through his mouth. His nose was completely plugged by doctors so that changes in body function could be measured and compared.

Not only did Nestor find he felt physically and mentally awful during the study, but his health objectively and dramatically declined during this time. His blood pressure and resting heart rate increased significantly. His sleep, performance, and mood suffered, The biomarkers improved once his nose was unplugged and he began breathing nasally again.

Nestor makes the point that breathing through the nose, or nasal breathing, is in fact normal and much more important for wellness than most people know. Of course, if you’re an allergy sufferer, you already know how uncomfortable and disruptive a stuffed up nose can be!

BACK IN STOCK FOR WINTER:

HERBAL TINCTURES TO STOP THE SUFFERING:

Lung and Sinus Support (soothe and decongest the lungs and sinuses)

Cough Support (soften and calm your cough after respiratory illness)

Histamine Balance (tamp down the histamine reaction that causes allergies)